Share All sharing options for: THE BIG FOOTBAW GAME: OSU/TEXAS

Someone told us Bob Davie, despite using the word "footbaw" and other folksy bits of language, actually hails from Pennsylvania. We bet he wears cowboy boots when it's inappropriate, too--someone send us five dollars if true. We also bet that the person who told us this carries a ragged Davie voodoo doll loaded with pins, and roots now for a coach whose belt should get a Heisman vote this year just for the effort it put in every Saturday night. Davie covered the OSU/Texas game Saturday night, along with Brent Musberger. They did not make Musberger wear his unfavorite gameday outfit, but he was in fine form for the game, bellowing and hollering over even the smallest action. For all his bluster, no one manages to say the name of a player with more bombast and relevance. The way he says Ted Ginn--"TEHHD GINNNNNNNNN!!!"--somehow contains the gist of exactly what just happened in the pronunciation. It's as if on hearing it you could, without ever seeing Ted Ginn before, understand that "the unreal speed of this player has resulted in yet another score on a go route in single coverage."

This brings us to the actual game, where we officially got tired of hearing Bob Davie say the word "footbaw," a word in Bahasa Indonesian meaning "horrifically sunburned announcer." Rankings couldn't tell this, but we guessed with unlikely accuracy that Ohio State would win because their quarterback was older. Ultimately this was the difference: looking at the gameplan, it appears Texas did everything correctly in the effort to accomodate their freshman qb, Colt McCoy, whose name is completely made up and cannot possibly be real. They went short and screeny; they split option read and speed option plays up between two of their three fearsome backs, though we didn't see Gargantua once in this game, a shame since he's a blast to watch just lumbering onto the field. (That's Henry Melton, the Longhorn back who's at least 270 pounds of rubbery fury.)

They even let McCoy throw every now and then, and not just tosses of the easy flanker screen and five yard curl variety. For the most part he seemed past competent, especially for a guy volunteering for blunt-trauma medical experimentation by the Ohio State defense in his second collegiate start ever. He didn't get two things, though. First, he didn't catch a break: Billy Pittman's fumble at the goal line in a scoreless game took a methodical scoring drive and set fire to it in seconds. Texas went from scoring first at home to sitting on a flipped field wondering where all the good karma went to in about five seconds.

Second, McCoy did exactly what he was supposed to: check down, check down, and check down some more. Granny Mack--the incarnation of Mack Brown who doesn't rock out to his IPod before games, let his qbs wreak havoc on opposing defenses with improv, and in general plays loose prior to key matchups--made a furious comeback in this game. Brown and OC Greg Davis didn't trust McCoy, and who can blame them? He's a freshman going up against OSU, and even with the relatively generous approach to McCoy he still threw a pick and at times looked youthfully indecisive under fire. (Peter, btw, thinks Davis put the reins on McCoy completely and totally.) Texas probably thought they might win this game 13-10.

Jim Tressel had no such intentions. The Buckeyes played the Texas defense brilliantly, though not by outfoxing them with a slew of strategems or fakeries. The Texas defense keyed on Ginn, so the Buckeyes went binary and just threw to the other guy, Anthony Gonzales. He led the team in receptions because Ohio State still managed to run the ball more than they passed, enabling play-fakes and bootlegs, and also because the Texas D also had to worry about Troy Smith's running ability. They had little to actually sweat, since Smith seemed all too happy to camp in the pocket and play paper-rock-scissors with the Longhorns. And when the Longhorns finally left Ginn in single coverage, the Buckeyes went straight for him for the TD that really sounded situation critical for Texas. A rock to their paper, and Ginn glided into the endzone to Musburger's thunderous appreciation. You can't fault Texas for losing the game, though. Though Notre Dame's reality check to Penn State comes close, this week's collective Tip of the Hat has to go to Ohio State, who's clearly swelling into optimal form early this season. To lose nine starters on defense and roll in without a hiccup and shut down Texas--even a Texas with a slightly handcuffed quarterback--represents an impressive achievement. They didn't go blitz-wacky, but instead just played their base defense and allowed newbies like Andy James Laurinaitis to play rugby with the Texas backs while clogging McCoy's vision with Buckeye jerseys. They did blitz consistently, but never threw six or seven at a freshman qb because they didn't have to in order to fluster McCoy. Well played, Sir Sweatervest.

The temptation here is to go shitty and call Ohio State's strategies, gameplay, and overall way of doing things "old-school," or even "delightfully simple." But that's condescension cloaked as a compliment. The ten-dollar word for what Ohio State does on the football field is "baroque," simple oscillations between a few options that pile into complexity through skilled variation. They have a good, sturdy running back? He gets the ball up the middle. They have a lightning fast wideout? He goes on glorious fly patterns and dares defenders to catch him. Is he covered? Then throw to the other wideout, who's likely open and waiting for a pass underneath. They work their talent the same way on defense, which is how last-year's cleanup crew clocked in and played like starters in their second game.

It's almost beautiful, really. Tito, grab me a tissue... 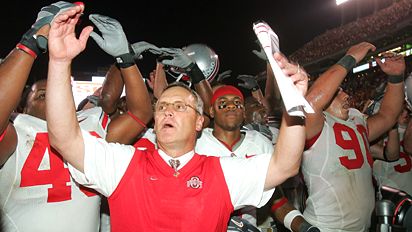