Share All sharing options for: CASTING CALL: ACC, PART ONE

With the season rolling in with the force of an impending thunderstorm, we encourage you to take cover in the last bits of frivolous satire before ACTUAL CONTENT rears its head and forces everyone to write about things that actually happen. The upcoming drama means you'll have to familiarize yourself with your dramatis personae, the cast of characters for this year's production.

A fading legend in the twilight of his career. Has a fondness for odd hats, fancy eyeglasses, and the occasional bitchy dig at his rivals. Once threw Rod Stewart out of a limousine. Who knew that Elton John had so much in common with Bobby Bowden? We did, actually, since both are just fine with "boys being boys," though for dramatically different reasons in each case. 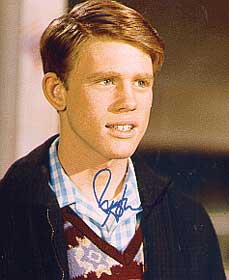 It's not just the red hair. There's just a certain all-bran wholesomeness about the former Marine and current head coach at Boston College that meshes right with the man who played Opie. The two are also similar in that their productions are tightly produced, conservative in their execution, and are, according to some, overrated.

Now that Ralph's temporarly unoccupied for a while, we think he's a born double for Tommy Bowden. Both have had tumultuous careers, and both have benefitted from sinister, dark networks of back-slapping and easy money. Both, coincidentally, have actual close ties to embezzlement and corruption. Plus they share a fondness for immobile well-sculpted coiffures and losing when it hurts most, though at least Tommy has won once in Georgia.

We should note two things here:

1. Al Molinero is not dead. This is something we didn't know when we woke up this morning.

2. Al would have to get a pair of double-D breast implants to play the pec-a-saurus that is Chuck Amato, a risky surgery for a man born in 1919.

Upstanding guys. By the letter. By the book. Able to be pushed around with enough force, but don't underestimate either of them.