Another great sign of impending football: that itch in the back of your throat. At this point, three weeks prior to the season, you may notice it as just an itch, a little tickle. Next week, you should recognize it as a definite hint at thirst. By the third week, just days away from the first kickoff, you will experience a definite, raging thirst. Additional symptoms may include:

--involuntary curling of your favored hand into a C-shape, as if it were already holding a drink.

--Delusional behavior, including the purchase of foam sleeves known as "coozies" in quantities far exceeding need.

--A sudden susceptibility to suggestion. This symptom usually manifests itself in the notion that despite drinking beer regularly, you may date models, flash perfect six-pack abs, and encounter spontaneous parties full of beautiful people who all want to get down with you because you're drinking the same beverage they're consuming, even though they're all at least three to four notches higher than you on the Objective Human Attractiveness Scale. You will find that this is not only untrue, but that drinking huge amounts of beer works against the possibility these things ever entering your sphere of reality.

Which brings us to the root cause of this behavior: Libation, another important brick in the awe-inspiring edifice of college football season's advent. Like Siegfried and Roy, college football and drinking enjoy an officially unsanctioned marriage that thrives without legal consent. It's in the warp and woof of college football to drink and sometime drink heavily in conjunction with games, and it is good, for the most part.

This is excepting the times when you end up walking home two miles from a woman's house wearing one of her dresses following a particularly emotional evening of gridiron action...but enough about the good Father's past! Onto the categories and the praise they deserve:

"Beer is proof that God loves us and wants us to prosper."
--Ben Franklin 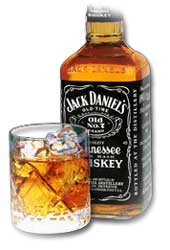 "The proper union of gin and vermouth is a great and sudden glory; it is one of the happiest marriages on earth, and one of the shortest lived"
-Bernard de Voto

"Vodka is tasteless going down, but it is memorable coming up"
-Garrison Keillor

"Navy SEAL my ass--come get some, Nancy!"
-Orson Swindle after drinking some amount of vodka at the 2002 Florida/Tennessee game

"My God, so much I like to drink Scotch that sometimes I think my name is Igor Stra-whiskey."
-Igor Stravinsky

"Computers have enabled people to make more mistakes faster than almost any invention in history, with the possible exception of tequila and hand guns."
-Mitch Radcliffe

Football is coming--let its name be praised.

Mass has ended. Go in peace.