ARKANSAS: LAND OF THE HEMICURSE GETS TOE UP

Share All sharing options for: ARKANSAS: LAND OF THE HEMICURSE GETS TOE UP

Arkansas as a football state is not exactly cursed. They have a cool mascot--mmm, bacon--a history of good, and if not good at least interesting coaches, and lunatic fans willing to make piggie noises loudly and in public.

However, they're not exactly living on the shiny side of karma's ass, either. In our own lifetime as a football fan, Arkansas has always been this close to doing something before imploding or being struck down by something resembling dumb luck or a "half-curse," which we'll refer to here as the hemicurse. They always play hard yet lose due to offensive power outages or improbable last minute plays by the opposition; they make SEC championship games only to have Clint Stoerner fumble while running the clock out or Ben Hanks intercept an option pitch. And their phenoms inevitably flunk out or suffer sophomore slumps that stretch well into their junior and senior years. 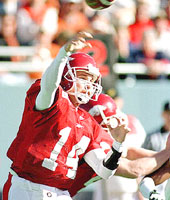 All of this makes Darren McFadden--aka Defense Department Weapons Project X34b "Universal Warrior"--getting his toe broken in a bar fight Saturday night all the more expected, since this is exactly the kind of thing you should expect when it comes to Arkansas football. McFadden dislocated the toe early, early on Saturday morning at Palace the Club in Fayetteville in an incident that got as sloppy as you could expect for Arkansas at four in the morning:

"Darren was kicking and kicking at him and his shoe came off and his foot hit the pavement," Millsap said.

The other man in the fight fled when police arrived, according to a security guard.

Sgt. James Lesher of the Little Rock Police Department said that while the fight was going on, someone stole the car McFadden's stepbrother was driving.

That's as bad a night as we can remember having in college, and we didn't even dislocate our toe kicking the pavement. Though early reports indicate that McFadden will not play Sept 2 against USC in Fayetteville, we bet Houston Nutt will have McFadden's whole family bound and gagged in a warehouse somewhere on campus in order to extort the wunderkind into playing through the pain. Nutt's already double mortgaged the house in order to keep his job this year, and a desperate man takes desperate measures. Given the slow creep of the Hawg Hemicurse and Nutt's verified Boss Hog insanity, it wouldn't be surprising.