NOWHERE TO GO BUT DOWN

Share All sharing options for: NOWHERE TO GO BUT DOWN

Below, my temporary EDSBS colleague Senor Westerdawg, drawing from ratings of which I have no knowledge, has identified "The Most Underrated Revenge Game of 2006" from among a pack of likely contenders, including Oklahoma-Texas, Florida State-Florida, Michigan-Ohio State and Notre Dame-Michigan State. Out-vengeancing all of those annual hate-fests in Paul's estimation, however, is the typically tamer Auburn at South Carolina throwdown on Sept. 28 - not because, as one might suspect, impatient, grudge-holding SMQ fave Steve Spurrier will have his charges geared to atone for 2005's horrific 48-7 loss on the Plains, in which the 'Cock-N-Fire offense failed to enter Auburn territory before well into the fourth quarter. Rather, Westerdawg forecasts revenge will be sweetest for the Tigers' eerily-well rounded, all-SEC back du jour, USC transfer Kenny Irons, who had not yet emerged as one of the most unstoppable weapons in the league when he faced his former team in '05 but will not spoil this final chance to cement said status by galloping for hundreds upon hundreds of yards against his old mates (and against Carolina Defensive Coordinator Tyrone Nix, former Southern Miss linebacker and coach and very large human for whom I have too much, um, respect to second Paul's prediction).

I will make another prediction, though, itself related to a "Revenge Game of the [Insert Appropriate Amount of Time Depending on Your Well-Reasoned Perspective]": Louisville, triple OT losers in Morgantown last year, will beat West Virginia and win the Big East's automatic Mo' Money bid.

This would not seem to be very out on the limb at all, as the Cardinals were monster favorites in the league in '05 - after displaying monster juggernaut status in C-USA in '04 - and mostly played like it, save an early, completely inexplicable wipeout versus South Florida and the very end of the game against West Virginia, when U of Hell blew a 24-7 fourth quarter lead - with a little help, it should be noted, from later-reprimanded Big East officials on a critical onside kick. Louisville also returns the Big East's leading passer, leading rusher (and two more who combined to top 1,100 yards), leading receiver (and another in the top five) and seven starters on defense. The Cards also led the Big East in scoring (29 points more than WVU in league games, 136 more in all games, with seven straight games over 40, two games over 60 against BCS conference opponents and 30 and 24, respectively, in two games against top 10 national defenses without its starting quarterback) and outgained conference opponents by almost 175 yards per game; they outgained the Mountaineers by 60 yards head-to-head, the difference in that game turning on a +1 turnover advantage and a failed two-point conversion to tie on the final play of the third overtime.

I.E., Louisville is about to blow the fuck up. Again. And West Virginia is standing a little too close. 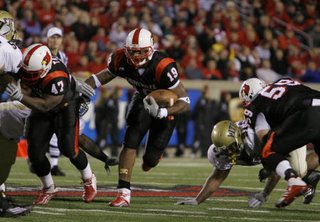 Don't you know who I am? I'm the juggernaut, bitch!

Not that West Virginia didn't deserve to win - but look what that victory, along with the stunning Sugar Bowl upset of Georgia, has wrought when projecting the upcoming season: the 'Neers got early smooches from Sports Illustrated's Stewart Mandel, then full-on, under-the-skirt petting from ESPN's Pat Forde, who proclaimed WVU No. 1 in May. Preseason magazines came out shortly after, all ranking West Virginia in the top ten, from 3 (Lindy's) to 5 (The Sporting News) to 6 (Athlon, which also rated it the No. 1 "Program on the Rise") and this week topping the Big East media's preseason polls.

So does anyone else get the feeling this team's going down to Maryland in a Sept. 14 Thursday night game, with at least two more humiliating defeats to follow? It's easy to forget, with the way it started flattening folks later in the season, how much of a defensive team West Virginia was, and half that unit - and just about all of its principles - are gone. It's also easy to forget how one-dimensional the team was, and I'll will believe this team is some '95 Nebraska, run-for-280-at-will steamroller when I see it; it is sophomore slump time for Pat White all the way. I won't go as far as (apparently) the only other 'Neer skeptic this summer, Phil Steele, who picks WVU third behind Pittsburgh (though his top, uh, 47 has West Virginia No. 17, slightly below my projection, and Pitt way down at 39), but I've already elucidated the historical warning signs, all of which point to "bust":

It's not that West Virginia is going to be bad - it's not impossible, but very unlikely it will miss a bowl game, and probably will play in a decent. But over the long haul, the major arc, what's the high point of that program? Can it do better than an 11-1, conference-title-winning, Sugar Bowl-upsetting season? I see no reason yet anyone outside of the state of West Virginia should believe it can.