Hopefully you don't remember this:

In other cases, though, message board communities can run 180 degrees in the wrong direction with a story with amazing consistency with existing fan beliefs. This tendency warps even further when the story has to do with a rival school.

Did you know that a NCAA official visited Auburn recently? Hmmwhaddya think THAT means, huh? COULD BE A VERY INTERESTING SUMMER IN ALABAMA ha ha ha ha

Bama boards wentand are goingnuts with insinuation, innuendo, scuttlebutt and calumny about Auburn.

It ain't calumny if it's true, which it is. Which makes us dead, dead, dead wrong about there being little to the whispering campaign bubbling for three plus months on the Plains. Someone's alleging that 18 Auburn football players took 97 hours in classes from a sociology professor, Thomas A. Petee, and that those classes involved very little reading--often as little as a single book--and the award final grades that differed from the students' overall GPAs by the deviation of more than a full point. If you would like a big name benefitting directly from this arrangement, you have one: Cadillac Williams, former Auburn running back and current Tampa Bay Buccaneer.

The prof in question, Thomas A. Petee. Note the sports-themed bobbleheads in back.

Someone in this case does not mean a disgruntled Alabama fan off his medication chewing on his shoes in his mom's basement while feverishly dialing Paul Finebaum for the 872nd time that day. Someone in this case is an Auburn sociology professor, James Gundlach, who blew the whistle on Petee and the "directed readings" and went to the Times with the story. Gundlach alleges that a pivotal faculty meeting ended the willy-nilly awarding of the directed readings to athletes. (Only in academia can you find the phrase "pivotal faculty meeting.")

Yet rather than chasten Petee for the haphazard awarding of directed readings, Petee received a promotion to chair of the Department of Sociology, Anthropology, Criminology, and Social Work, a position he will probably hold for the next ten minutes following this story.

Cracking out our admittedly rusty Occam's Razor, let's look around the factors and likely outcomes of the situation.

Reaction One: Is this something? Answer: definitely. The sourcing doesn't come from a hayseed Deep Throat or begrudged employee. It's a professor just shy of retirement who's sitting atop years of credibility and a guaranteed pension thanks to tenure. In the article his basic testimony is correlated by multiple former Auburn players, administrators, and other professors on campus. All point to Petee's classes and directed readings set up by Virgil Starks, the director of Student Athlete Support Services at Auburn and a victim of a name given to him by Fate's Typecasting Department. The sourcing is solid, so shooting the messenger will not be an option for Aubies looking for an easy out, particularly since Starks played an important role in funneling students to the sociology program. That's collusion on the part of the athletic department, which prevents this from being a lone wolf case of a single, sports-mad prof dishing out free credit to anyone who could make or break a tackle. 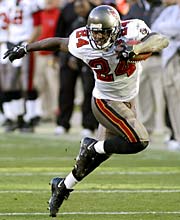 Cadillac cruised through college. Now you know how.

Reaction Two: WOOOOOt!!! AUBURNZ GOING DWN 111111. The initial reaction after reading this for collected Georgia and Alabama fans will be pure schaudenfreude, a natural sentiment since the period of concern coincides directly with the apex of Auburn's recent football success under Tommy Tuberville (who very wisely adopted the ancient PR tactic of "ain't saying shit" in regards to the story.)

The regulatory entities overseeing any potential sanction, punishment, or response to the potential academic fraud come in a three-pack.

First, there's Auburn University, who through the office of the Provost has launched "its own investigation" into the situation. The story, wending its way through message boards in many surprisingly accurate permutations, was pre-empted by a statement yesterday only mentioning the Auburn board's commitment to maintaining its accreditation and that an investigation was ongoing.

We could take this initial reaction one of two ways: either Auburn wagers that this comes to nothing and can be pinned on a single professor, or they're grabbing their collective ankles and waiting for the reaming of their already shaky accreditation that might follow this story. It's an strategy betting on two extreme outcomes, which considering that this is an academic scandal involving SEC football players seems like sound gamesmanship on their part. Second, there's the accreditation entity, the Southern Association of Colleges and Schools. Auburn's already earned probation from them one in 2003 following a bloody insurgency in the Auburn community regarding the freewheeling ways of its Board of Trustees. This intifada of lawsuits, editorials, and likely unseen fistfights between grown men ultimately culminated in SACS placing Auburn on academic probation from 2003 to 2004. This incident could provoke SACS to revoke accreditation completely, a nasty scenario leaving Auburn on footing shakier than your local chapter of DeVry College.

Third, there's the NCAA. If you would like to know what they will do...you won't. There's no rationale behind the way they behave as an organization. If Auburn had an offensive nickname or played D-II ball, we would be talking serious sanctioning here. Yet there size, status, and success in the business of collegiate football presents a hard sanction for what remains a toothless, confused regulator. Ask Hypnotoad what the NCAA's going to do--you'll get as good an answer from him as you'll get from Myles Brand.

Reaction Three: That's The SEC For You. It would be great to refute this. It really would. You know, we wish we had those secondary abs, too. Like D'Angelo has in the "How Does It Feel" video: the eight-pack with the cuts shooting down off the stomach into the groin? We'd wager that fifty percent of women would actually take their pants off for you on the street if you had those, and since we're married, that's all we'd do: flash secondary ab, take the pants, and walk down the street with our shirt off and a stack of women's pants over the shoulder like the prize kill of a hunter. We don't have them, though, and this is well-documented proof that Still, Everyone's Cheating.

Just one ab. We don't need to borrow the whole set, D'Angelo.

Mike Slive, the head of the mucho-monied SEC, has stated that cleaning up the conference's reputation stands as a priority. An opportunity to demonstrably act on this has just crashed flaming and smoking into your living room. Just saying...

As for Tuberville, we recommend the words of Admiral Painter from Hunt for Red October.