Do we need to write that this is purely speculation? Strictly just to ensure that we're not going to end up in hock with the silica gel-eating crowd out there? Okay then: the following is merely a list of idle speculation on which coaching republics might be experiencing a bit of regime change next year, either imposed from within or by the presence of more attractive invading forces waiting just outside their borders (or in one case, actually inside the state in question.)

NOTE!!! Stranko would like to remind you that in this department we are historically beyond the realm of wrong in predicting who gets fired at the end of the season. We expect this piece to look just as foolish in retrospect. (Yeah, that Greg Schiano. He's going nowhere but home, dude.)

Strip the names off this case, and it's got numerous classic signs of flailing headman:

Comparable to... Kim Jong-Il. Despite announcement of new technology, most of the world waits for inevitable collapse of isolated, middling empire and messy succession struggle. 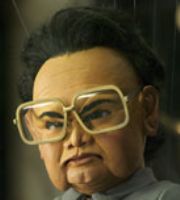 --Thought by many to have squandered the phenomenally talented Brad Smith.

--Aside from beating declining Nebraska teams, comes up shy on signature wins.

Comparable to... Sapurmurat Niyazov, the "supreme leader and father of the Turkmen people" also known by the single moniker "Turkmenbashi." Kind of suspect, but who else would you want ruling a long ill-starred piece of territory? And yes, we just compared the football program at Missouri to Turkmenistan, but the comparison holds: allegedly rich in squandered natural resources and victimized by sitting in the middle of a vast expanse of land traditionally dominated by foreign powers. And since the place isn't obviously catching on fire, who else would you put there? 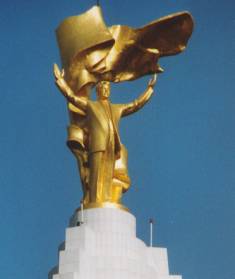 No gold statues of Gary Pinkel in Missouri...yet.

The one guy we're willing to bet will be needing political asylum in a hurry after 2006.

--Inspires infectious despair amongst Kentucky fans, who often lay down on the pavement staring at the sky at the mention of his name.

--Charisma rating somewhere between vial of plague virus and half-blind 18 year old cocker spaniel who pees the rug and attacks furniture for no reason.

Comparable to... Robert Mugabe: old, crusty, unapologetic, and has run program into ground following slight glimpse of light in the Guy Morriss era just like Mugabe took groovin', just-getting-there Zimbabwe and floored it into the ditch. Unless a miracle happens, Brooks will be pushing his Garden Weasel around the homestead in early January easy.

The improbably threatened but still mentioned Chairman Coker may be the strangest on the list.

--Umm...has compiled the fourth-best winning percentage of any college coach ever in his first four years at 44-8?

Total instability points: X sub n. The X stands for that which is rational and good: that Coker is a good coach playing through some offense tumult and still cranking out 9 and 10 win seasons. The sub n denotes the irrational power of Miami's past and potential glories to allow the alumni blinded by the potential of a Butch Davis return to the Miami sidelines, an unknown quantity that could put Coker out of Coral Gables. Think this is pulling something intriguing from our ass just for giggles? Listen tomorrow on the Podcast with Bruce Feldman, who suggests exactly this scenario when we ask about the Butch Davis to Arkansas rumors.

Comparable to... Lee Hsien-Loong, the current capo of the state of Singapore. Inherited small but much admired nouveau-riche state once on the fringes of the scene, but now a player operating far above humble beginnings. Presided over the slightest of downturn in fortunes but seems steady and competent enough for a high-profile post, especially in the law and order department. Firing would be baffling at this point.