Share All sharing options for: OPEN LETTER TO NETWORKS: GO LIVE AND UNINTERRUPTED

We can't really hide it anymore: not only have we been watching the World Cup, but are obsessed and checking scores like Tunisia-Saudi Arabia is the Iron Bowl or something. College football has little to learn from the World Cup since fan enthusiasm is on par for insanity (if not scope) and the games can't even begin a fair comparison because of their obvious, glaring differences. Brian Cushing would make a terrible midfielder, we're sure, though we think Jan Koller would have been a decent second-string tight end on an American weight-training and diet regimen. 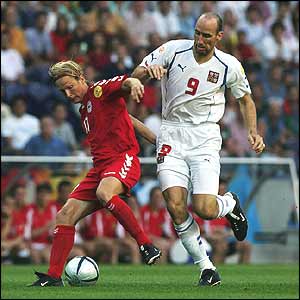 Jan Koller: would have been a fine second-string TE with enough chicken fingers and dead lifts.

One thing we can learn from the World Cup can be applied rapidly and effectively to the broadcast of the games. Watch a World Cup match and around fifteen minutes in, something strikes you: it's seamless, uninterrupted sport. The splonking fan horns, the ebbing roar of the fans, the measured patter of the announcers...it rolls for 45 minutes without interruption by a single detestable commercial. Logos of sponsors are displayed prominently in the upper left hand corner for the entirety of the match to earn ad revenue along with periodic chime-ins from the announcers plugging sponsors.

Here's the pros and cons to commercial-free halves in a college football scenario.

Marquee games tend to run even longer than the usual three and a half hours thanks to commercial breaks. Rather than beggaring down the length of games through rule changes, take out commercial breaks to break down marathons and you'll take a big step towards corralling the five hour monsters playing havoc with television schedules already.

3. Vibe. Purely an aesthetic call, but the gaps between football plays will allow the viewer to marinate even more in the mood and setting of the game. Also allows for more shots of attractive young drunk people, which is a good thing.

4. More football story. Imagine feeling the rhythm of the game as the fans in the stands do. That would happen with uninterrupted halves.

5. Never having to watch a Yella Wood/Bryan Hot Dogs/Buick commercial trample over the jump-cut beginning to a crucial play following a commercial break. For you non-SEC fans, Yella Wood is a compressed wood business advertising via a series of spots involving fat man with a twang who finds himself in dangerous situations, whereupon he explains himself by simply saying he was looking to sell good people the good wood that is Yella Wood. The only proper application of his product in a football setting would be a quick, accurate strike to the back of his fleshrolled head.

1. Change. This scares sponsors to death, sponsors who are told weekly by their paid marketers that their ads work and give them higher profits. In reality, fans might express greater gratitude towards sponsors by butting out of their vision during something as sacrosanct as a big football game and sliding tastefully into the background. But there's money invested in the current system, and until you find a way to raise sponsor visibility in a nearly equal fashion--a crawl at the bottom of the screen, more lively graphics in the corners--it's going to be a huge hurdle.

2. The price of uninterrupted football. Bad announcers struggling even more to fill the void. Chris Spielman possibly letting loose the "SHITFIRE FAGGOT MOTHERFUCKING PISSASS GODFUCKINGDAMMIT" fits you know he throws in the commercial breaks that keep him from ripping his shirt off in excitement when they're on air and violating countless FCC codes.
Lame sponsor plugins that might annoy more than commercials. There will be drawbacks, and what networks do with all the empty space could be nightmarish. We're looking at you, Fox Sports.

Discreet. Sure, they'll be discreet.

P.S.: Didn't Jefferson Pilot do this very thing three or four years ago? If anyone else has this vague memory, please leave a comment below.