Trolling message boards is full of vitamins and good for you 'n stuff. Proof comes in Paul's unearthing of an old MP3 file of the late Jack Fleming, West Virginia's legendary announcer, reading through his awesomely deranged pregame screed against the "invaders" from Penn State and their leader "Darth Vader from Mt. Nittany." Paul describes him as like Larry Munson "without the filter." We weren't aware Larry even had one, though if he does the contents of his mind must sound like the sonic equivalent of a herd of mandrills smashing bottles against an endless brick wall.

The clip is a must-listen for anyone cursed with a bland "voice of the school" who hesitates to add even an iota of color to the broadcast past the occasional "OH, MY!" And yes, we're talking about our own Mick Hubert, who bores us to weeping, heaving gusts of tears. We'd actually draft Munson in the announcer's fantasy draft before we'd take our own guy. We'd take Jack Fleming over him, too, if They do not and cannot make announcers like this anymore, which is a screaming felony against all that is good in life. 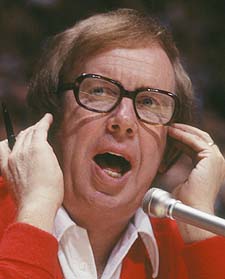 Betcha he liked scotch and broads, too.