FIVE LOSSES DO NOT A CHAMP MAKE

Share All sharing options for: FIVE LOSSES DO NOT A CHAMP MAKE

It's been a while since we've read a Matt Hayes column. There's reasons for this. First, we've written before that Matt Hayes= "dick," mostly for the way he handles his readers in his mailbags, but also for a general, creeping sense of smug informing his whole print persona. (Does he live in San Francisco? Just a question.) This--combined with the dorky photo of him on the Sporting News--awakens our latent bully gene and makes us want to beat him with a rake. Matt Hayes enjoys the smell of his own opinions in front of a horrified audience.

And yet despite us not reading him for long stretches of time...he exists. (Sometimes not having a firm grip on object permanence can be a blessing.) And sometimes he wants to write about what morons talk radio guys are, particularly ones in Michigan suggesting Lloyd Carr's one dud season away from retirement to the Woody Hayes Home for Grizzled Antisocial Old Guys.

I kindly remind Mr. Host that since 2000, three teams (Oklahoma, Ohio State and LSU) have followed five-loss seasons with national titles. Suddenly, there is silence.

Uh-huh. And some people think cucumbers taste better pickled. Meaningless crap comes in a zillion tasty varieties, and this is an example of two of them: seemingly impressive but actually irrelevant stat meets completely misunderstanding the context of the question.

Seemingly impressive stat: three five-loss teams have, since 2000, won national championships the following year. Meaning...next to nothing, actually. Five loss teams abound; three of them have happened to win the national championships. The significant factoid pushing each of those teams into a group is length of coaching tenure. LSU, Ohio State, and Oklahoma all differed dramatically from Michigan '06's hypothetical championship team in that these all came in the first four years of the head coach's tenure, the big upswing into prominence/rebirth that all three of the aforementioned programs were arcing into under new coaching.

Little about the word "new" applies to Michigan's head coach. With Lloyd, it's not like he's going to get all spry all of a sudden and morph into the next Knute Rockne and unveil a whole new way of doing things. He's Lloyd Carr, and the large sample of his work Michigan fans have--over a decade at this point--indicates that he's going to go 9-3 and lose to Jim Tressel every year. Given the hullabaloo at this point, that doesn't seem like quite enough for many Michigan fans.
At this rate--three in a row to the stealer of hearts and leader of men Jimmy T--he'll end up occupying the John Cooper suite at the Outback Bowl shortly before his ignominious firing. 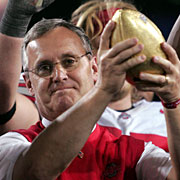 That guy. Oh, yeah. Part of the problem, too.

Hayes also misunderstands that Michigan fans are just tired of Lloyd's ass and the way he does things. Fans are promiscuous and always looking for the next piece, even if the one they've got has been as good as you can ask for. (See Spurrier 1998-2000, when even Florida fans found room to complain about "underachieving" Gator teams.) Hayes implies that fans are stupid just for wanting something new, which is gross ignorance on his part. Fans are quite smart--emotional, petty, and demanding, but smart on the big things. What you've got with Michigan fans is a firm collective grasp on Carr's optimal long-term performance, a steady and good stream of seasons without the spectacular bling of what some programs have done with new coaches winning championships within four or five years.

Carr is a victim of his own success--cliche, yes, but true. He's just a few years out from being an "established winner" and more than a few years shy of being "an entrenched institution." This dangerous, mid-life crisis period in a coach's career has hit Phil Fulmer, too, another coach with multiple conference titles and a national championship ring whose supporters seem quick to cut them loose with another lackluster season. Coach envy kills quick, with the question for most Michigan fans not being "Do we keep Lloyd on?", but rather "If/when we cut Lloyd loose, who's going to be the best candidate for the job?" If there's an attractive candidate for the job and Carr drudges through another 8-5ish season, Carr can draw the sword across his own belly and get it over with--not because it makes sense, but because that's the political reality of being a coach hitting the decade mark on a meh note. In some ways, second year coaches have far more job security than tenth year ones, if and only if because they possess something shimmering and golden that the longtimers don't: perceived potential. 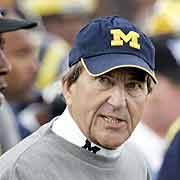 The shiny thing argument works here. It takes some time to explain, requires some context, and a modicum of respect for what large groups of people think. Or you could just be a dick and call Michigan fans and sports talk radio types dumb for finding the middling days of the Lloyd era irritating and saying so. The biggest whiff in the piece, though, is the omission of this fact: if those fat, loathsome sports radio types say Lloyd Carr is in trouble, then he is, and that's for a reason: because callers and fans tell them he is. But that would be obvious, non-contrarian, and make for bad columns. It would also knock the sportswriter from his pulpit/perch at the apex of the punditry food chain and put the bullhorn radio guys and bloggers on a level playing field. (Though some sports talk guys really are at the Koko the Gorilla, communicate-in-sign-language, hold my pet kitten level of intelligence. But perhaps that's a slap at Koko, actually.) Which brings us back to the refrain: