Before you view the latest awe-inspiring infographic from EDSBS Labs ("Where FORTRAN is still king!",) you'll need the key to make sure you understand the complexities of what your stunned eyes are looking at. The following is a graphic representation of fan unhappiness in the 2006 offseason as indexed for several prominent teams around the nation. None come from the West Coast, because you're all just too blissed out there at the moment to worry too much about football. Also, no one's really flailing too badly out there at the moment, though we'll give Ty Willingham the benefit of the doubt in the long run--he could appear on this list quite early next season with a few embarrassing losses followed by long, luxurious weekday afternoons spent coping on the links. 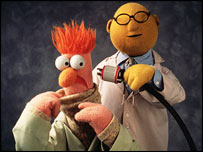 EDSBS Labs: We leave Muppet Labs in the dust.

Harvey Korman as Hedley Lamarr= Dennis Franchione. Not only for the physical resemblance, but for the all-too-often self-proclaimed genius of the man. His mind is a-glow with whirling transient nodes of thought, careening through a cosmic vapor of invention. His defense, however, sucks, which in Texas is only acceptable in Lubbock.

Stay-Puf in Orange=Phil Fulmer. If you couldn't guess this, then you must have stumbled onto this blog looking for "Brady Quinn shirtless." There's better sites for that.

Michigan Punts=Lloyd Carr. As in Lloyd's favorite soup, Split Punt Soup. Or his autobiography, "Punt Punt Punt: A Punter's Punt of Puntdom." Or his favorite Kentucky Derby Winner, Punt Given. Or his favorite playwright, Harold Punter. As Lloyd would say: "Punt."

Elton John=Bobby Bowden. Really an insult to Elton, but a nod to Bobby's tasteful hats and glasses ensembles over the last few years, along with a passing, "squint when drunk" resemblance to each other. A few Elton John song titles do come to mind, when we think of Bowden and FSU in 2006:

All data in this study was produced by Magnum, P.I., who just took your girl on a ride in the chopper with T.C. before seducing her on kayak in the moonlight. You may also click here for the Mangino-sized version.