SEC HOME COOKIN': A DEAD HORSE GETS A FRESH BEATING

Share All sharing options for: SEC HOME COOKIN': A DEAD HORSE GETS A FRESH BEATING

Remember last offseason in the blogosphere? We do, and so do the eight readers we had at the time. Amidst other wastes of bandwidth, one of the most annoying liveliest debates between bloggers, writers, and other ne'er-do-wells centered around the undeniable fact that historically the SEC has been less than adventurous in terms of offseason scheduling. That's actually just one way to put it, really: another way would be to say that the SEC are in fact cowardly, corrupt rednecks, addled by pellagra and whiskey, and spinning a fraudulent legacy of greatness while hiding behind a cupcakey schedule and beating up on the perpetual underlings of their conferences. 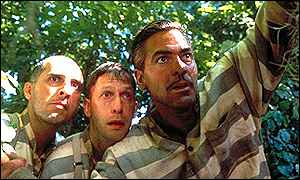 We just don't know no better. Must be the hookworm. Enoch--more whiskey!

Obviously, them's fightin' words for the SEC faithful, who responded in kind (though not often kindly.) We counted ourselves in that camp, dissenters' wing, mostly because as with many things the decisions made by ADs in the SEC came down to money, money, money, and not because of some inherent supremacy of the conference/Southern football/our big, swinging, bacon-fed dicks which are different that anyone else's.

Cue up the dead horse: The House That Rock Built, inspired by our open letter to Jeremy Foley just letting him know that a Notre Dame/Florida matchup was at least theoretically possible in the near future, brings out the dirty laundry here and here, though mostly in a positive sense. He wants to see more dramatic football games, and SEC out-of-conference games involving serious programs (not just straw dogs like Miss. State and Vandy) make for gasping of the Shakespearean variety.

Fightin' Amish is writing about what should happen, adopting the prescriptive mode of things here. This runs counter to the descriptive take on the situation: that SEC ADs whose programs guarantee massive--the largest as a conference, actually--revenue from home games have little incentive to schedule challenging out-of-conference games, which is why Vandy's happily trotting up to Ann Arbor while Florida, our heart of hearts, schedules crapcake games like FIU and Troy when they should be running jaws open into the fray with the USCs of the world. That the SEC doesn't get out enough is beyond debate--they don't. But until the money works out for these teams, they won't change their behavior, and fans won't get the consistently compelling matchups they crave.

Coaches of varying sway and authority have little incentive to change their behavior, too; saddled with immense pressure to amass numbers and results, regularly stock up on cupcakes to pad numbers in de facto scrimmages in between vital rivalry games and regional matchups of great import. Some coaches buck this trend, and for that we salute you as heavy-testicled badasses--Pat Hill, Pete Carroll, Mack Brown, take a bow and adjust your specially constructed undergarments. Most coaches, though, remain content with taking the lead of ADs in their scheduling, understandable that given the soul-crushing bathyspheric pressure of being a head coach anywhere.

Just another day at the office.

Summary: they're not being cowards, they're not being insular rednecks, they're just responding to dollahs and hollas from alumni and the press. Teams that do travel have powerful incentive to because of structural reasons. Notre Dame, for instance, has always had an incentive to travel because of their historical role as college football's 800-pound gorilla maverick. Alabama--before they were really Alabama--took up the torch for Southern football in the 20s and 30s with a series of West Coast swings that defined Southern football and laid the groundwork for the hype/aura/fine sheen of glorious bullshit that the relatively new SEC inherited. USC's always traveled because, given the geography and the tendency of all print to run downhill to the east in this country, they simply had to in order to gain notoriety.

What should happen--being pre-scriptive here--is a change in incentives to encourage cross-sectional rivalry games and break the junk-food habit of the SEC. Tangible steps on how to do that? Well, we've got a few in our pocket right here...

Reward risk. Whether it's via a bolstering of the strength-of-schedule component in college football, a locking-down of automatic conference bids in the current BCS, or improved revenue-sharing from home-and-away agreements, you have to change the math for SEC ADs. Television money could play a tremendous role in this; rather than locking up the games within the confines of the network contracts, special bidding status could be allowed for future intersectional games of great interest, something budding college football providers like FOX would be more than happy to see since they'd throw dump trucks full of money at one-off series like Oklahoma-Miami or Notre Dame-Texas. Make the money work, and the action will follow, and no one plays a more important role than the networks.

Make the money work, and everyone dives in.

Punish the habit. Auburn knows about this one from hard experience, since scheduling the Citadel in your 13-0 season gave easy ammunition to the plaintiffs in the case of USC vs. Auburn '03. Strength of schedule must play a part here, too, especially in regards to bowl bids that remain too contingent on "which fans travel" and not dependent enough on "who won't roll over in a lackluster bowl game and produce a crapulent product no one watches past the third quarter."

The downside to cross-sectional scheduling (and using networks in particular to acheive increased intersectional games) : drawing network flies and a larger national interest. Increasing cross-sectional rivalries does bring an even larger national element to the game, which takes away a certain amount of control from ADs and the conference commissioners, which may be the diciest element of encouraging road trips. It also brings the beady eyed, undivided attention of the Worldwide Leader with it, too; as it stands now, ESPN does a brilliant job on college football provided the Sportscenter-led Sportstainment! camp steers clear of it. If you hated the six months of bloat following USC around last year, you'll be hurling bombs in Bristol when "Notre Dame: Champions Never Die" the reality series hurls its way onto your television screens in 2008--or sleeping through any one of the soporific pre-Christmas bowls they're pushing into the schedule at a meth addict's pace.

Could talk more about your sport. Do you want that?