If this is all verified, certified, and sanctified, we may have a new leader in the points for the Fulmer Cup: Miss State has five players arrested for the assault of an off-duty cop in Starkville over the weekend. (HT: NewAZTiger.) The storyline has plenty of bonuses, but the capper is that the fracas really caught fire because of a violent argument between two women.

Whatever punishment the five players get, simple assault charges for five makes for some spectacular math: ten points minimum with a two point FnDC charge, and a commanding fifteen with three point felony charges. Again, all charges pending, but a massive revision in what has thus far been a relatively pacific Fulmer Cup race may be due.

In addition to the criminal charges, players will each have to face the wrath of Sylvester Croom, whose Unicron-like voice rattles the tiles in the ceilings of Tuscaloosa homes hundreds of miles away. 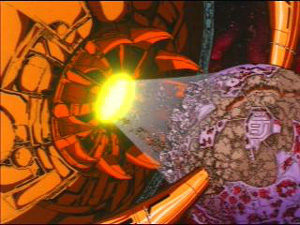 Sylvester Croom, seen here eating lunch, will no doubt have stern words for his players, who will then die from the vibrations of his voice.