By definition, the Fulmer Cup is a strictly 1-A competition, so the cataclysmic entry Delaware might have made into the race is rendered invalid by the rules. (Purdue fans, take a deep breath and remember: you still run this place.) Nevertheless, as a sort of primer on the art (note, not science) of Fulmer Cup scoring, we present the case of three Blue Hen football players involved in a home invasion for entertainment purposes only.

Three University of Delaware football players were arrested and charged with breaking into an off-campus apartment, holding two students at gunpoint and robbing them.

A fourth student who is not a member of the team was also arrested in the early Sunday home invasion.

Taking a page from the Maurice Clarett Vocational Handbook, the three players involved would instantly be assessed individual scores of 4 points...each. Why a galling 4 points each? BECAUSE THEY BROKE INTO SOMEONE'S HOUSE AND ROBBED THEM AT GUNPOINT. If that's not a four point offense under the rules, we don't know what is. (Actually, we do: a human trafficking ring run out of a dorm with the money laundered through an underground hip-hop label. Thank you, Miami '93! Trick love the kids!)

In addition to the whopping 12 points they'd score based on just a the principals, the fourth player involved--who we imagine as playing the part of Dave Chappelle to the other three's Wayne Brady in the scenario, just riding along when they stopped and said "let's stop by the ATM" and pulled guns and went in--gets a point for association.

Finally, we would have to assess one imbecility point for the players committing such a brazen crime while refusing to wear masks. If only they'd followed Bodhi's lead, man...that guy's so deep...(click more to see a disguise that might have worked a bit better) 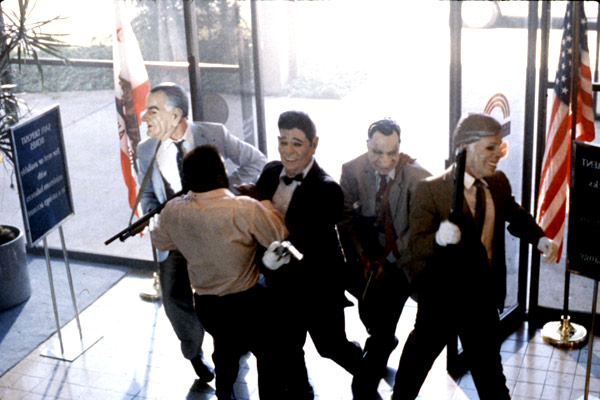