AREA MAN DRIVEN TO DANGEROUS EXTREMES BY LACK OF FOOTBALL

Share All sharing options for: AREA MAN DRIVEN TO DANGEROUS EXTREMES BY LACK OF FOOTBALL

Craig Feaster, area man and football fan, has been driven to dangerous extremes lately by the lack of football-related activities, say prominent Craig-watchers.

Feaster, an otherwise unremarkable man who lives in the peaceful, bland suburbs of Tampa, has been making waves by engaging in activities heretofore unknown to those who live around him, including exercise, reading, and speaking with his wife for several minutes at a time.

His wife confirms what most thought Craig-watchers thought of him prior to a remarkable change some seven weeks ago: "Craig's a pretty normal guy."

It was then that Craig began exhibiting behavior so unusual even his neighbors took notice.

"I was out walking the dog--musta been like, 7:30 or something--and here comes this huffing, puffing nightmare around the corner in brand new running gear and shoes," says retired neighbor and fellow college football fan Evan Turner. "Ever notice that good runners don't make much noise, but lousy ones sound like they're about to cough up their pancreas? Well, that's what it sounded like when Craig came around the corner in his Florida sweatshirt and matching shorts. I was like, "Hey, Craig," and he blurted out "Gotta go!" before lurching around the cul-de-sac and pounding out back toward the street," said Turner. "Damnedest thing I ever saw, especially the running shorts. Man shouldn't have to see that kind of thing before breakfast, or any meal for that matter." 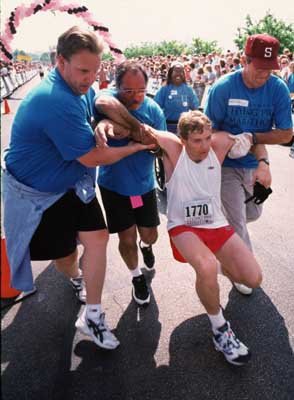 "I'm used to this guy coming in and buying football books. But last Thursday goes all "Invader of the Body Snatchers" on me and walks up with a running book, Malcolm Gladwell's "Blink," and "Idiot's Guide to Judo," and an issue of Outside magazine. It was like the reading list to a nouveau manhood curriculum. I nearly laughed my nametag off, but he would have run off because he was sweating bullets and wearing really short running shorts."

Feaster did, in her eyes, "seem different. And in need of a tan, like, bad."

No one has been more surprised at the changed Feaster than his wife Nancy, whose adjustment to the new Craig has been a difficult one.

"Craig usually trolls recruiting boards this time of year, or tries to figure out if his coach is going to get fired. But with everything that's happened--Zook getting fired, no drama, no one to really hate--I think there's a vacuum for him now," says Feaster, sitting poolside at their home. "I used to be able to have lunch with my friends any time, or go to sleep early, and just kind of go through my day without too much bother. Then this happened."

Feaster's search for meaning in the offseason has spread to even the most intimate parts of his life, according to sources closest to him.

"Um, yeah...there's that, too. I'm used a little spike in interest this time of year, but usually he at least takes me out to Outback or something first. Lately, though, he's been...I don't know. Do the words 'Cossack interlude' conjure up the right imagery for you? I can't keep this up."

"It's not just that, though: he wants to talk now. 'I feel this way, I feel that, let's work on this, let's go to couples yoga,' blah blah blah. If I have to take one more 'sensual bath' with him and talk about having kids, I've had it with all this whiny, emotional...man-talk."

Nancy Feaster slowly sipped her drink, and stared at the blue spring skies above her, pausing before announcing: "Let's put it this way. Spring practice can't get here soon enough for some of us."