HE'S STILL GOT IT

Share All sharing options for: HE'S STILL GOT IT

From even a passing glance at our site it is obvious that although we are fans of the college football game in general, our hearts are with the Gators. Why then do we not have Pope Urban in our top graphic instead of the Evil Genius??? It is quotes like this that let us know he's still the most entertaining coach in the college game.

Spurrier said there's one big difference in his recruiting situation at South Carolina and the one he had at Florida. "This year we're going to sign some kids from Alabama," said Spurrier, who has landed four players from the state, including safety Darian Stewart, who committed last week. "In 12 years at Florida, I don't think we ever signed a kid from the state of Alabama." He started to leave it at that, but he just couldn't resist. "Of course, we found out later that the scholarships they were giving out at Alabama were worth a whole lot more than ours," he said. 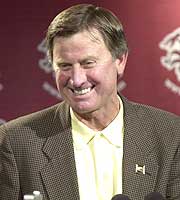 Yup. Still got it.