OUTBACK BOWL PREVIEW: IOWA, THE STATE THAT TAKES ONE FOR THE TEAM

Share All sharing options for: OUTBACK BOWL PREVIEW: IOWA, THE STATE THAT TAKES ONE FOR THE TEAM

Iowa...the land of...land. Lots of it, all with stuff on it. We know nothing about Iowa, but rather than make cheap jokes about corn, crystal meth, and how boring the place is, we emailed someone with said cheap jokes and asked him to respond. Mark Hasty, whose fine site The Bemusement Park straddles the dual worlds of both Spandau Ballet and the Iowa Hawkeyes, was downright Midwestern polite in not only answering our questions about the state, but also stuck around for some Outback Bowl preview chatter. We thanked him in a truly Floridian fashion by getting high on angel dust, forcing him at snakepoint to get a mullet, and stealing his car. Enjoy!

Orson: So...uh, Iowa. You're from there--why? Answer this question for yourself, or for anyone ever born there.

Mark Hasty: We serve a crucial public service, one for which we are severely underappreciated: By keeping Minnesota and Missouri apart, we ensure the Midwest's two weirdest cultures are not allowed to cross-pollenate. Unless you think a barbecued lutefisk and pig-snoot lefse wrap served with the weakest beer this side of the Taliban is a good idea, that is.

Likewise, we absorb more than our fair share of political absurdity so you don't have to. The whole flippin' WORLD owes us some thanks for this.

We have ensured that control of the free world has not passed into the hands of, say, the sort of person who thought the solution to
the 1980s farm crisis was for all the farmers to go out and plant 400 acres of Belgian endive (Michael Dukakis) or who thought the best way to emphasize a better-than-expected showing in a popularity contest (which is all our caucuses are, after all) was to mewl like an understudy from the Paramus Community Playhouse production of "Cats" (Howard Dean).

Iowa endured this so you didn't have to. Freddie Mercury rules.

Put another way, we watch Gary Bauer and/or Lamar Alexander For President ads so you don't have to. I realize every once in a while some state fails to consider the ramifications and starts to get jealous of our "first in the nation" status; like Jesus once said to the disciples, "You do not know what you are asking." There is a great comfort in knowing that you'll never see, say, Dennis Kucinich standing in front of YOUR local donut shop--even more so, that if you DO see him, he won't come up to you and try to start a conversation.

But I realize that the great state of Iowa is sort of a national "hate sink;" it's our destiny to live forever with the Green Acres image, so let me just say that you can say what you like about us, so long as you don't talk with your mouth full.

O: Thanks to a burgeoning crystal meth industry, does Iowa have an abundance of convenient 24-hour businesses?

MH: Well, I know ONE place you two have never been . . . the usual guideline in Iowa is "get it by 9 pm, or go without." I mean, even our hospitals aren't open 24 hours. True Iowans can't sleep anywhere but in their own beds anyway.

O: How do the Hawkeyes plan to prevent defections during their visit to Florida? Have they explained to them that the shiny, brilliant yellow disc above their heads is the sun, and not their brilliant vengeance of an angry god?

MH: I'm sure the coaching staff has fully explained that there are lots of very good reasons why Florida has its own tag on FARK. How the cockroaches grow to the size of soccer players, the average Floridian walks around with five wallets so they know they'll at least come home
with *one*, how if they move to Florida they probably won't get to live in subsidized low-income housing like they do in Iowa City . . .

Don't see one of these that says "Iowa," do you?

O: Ferentz got the bye for three years before Iowa looked anything but good. The exception or the rule as far as coaching goes? Are ADs too fast on the trigger, or too slow in most cases? We're interested since Florida's clearly a three year time frame school for coaches, while Iowa evidently isn't.

MH: It's a combination of three things: (a) we have an extremely patient athletic director who hasn't even gotten around to firing Steve Alford yet; (b) the presidency of the University of Iowa is a stepping-stone job, so an administration is never in place long enough to grow upset
with the football program, and (c) if we fired a coach after two back-to-back losing seasons, the Cyclone fans would wonder why THEIR administration never thought of that. Honestly, the last thing we would ever want to do is exacerbate the Clone fans' inferiority complexes.

(NOTE TO CYCLONE FANS: 'Exacerbate' is not a dirty word.)

O: What concerns you about Florida? What problems will they cause for Iowa?

MH: Speed. The same thing every Big Ten team worries about when they play an SEC team. There hasn't been a truly quick Hawkeye since Tim Dwight. Likewise, Iowa has done very poorly this year against "ninja football" like, say, Northwestern plays. (I wuz there . . . I saw it, and it wasn't good). I really don't think they'll be able to hand a spread field very well. 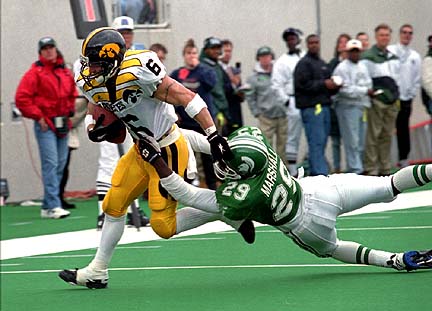 O: On the other hand...what about Iowa will give Florida fits?

MH: The defensive line. They are still rawer than good oysters, and they make lots of mistakes, but when they're on, they're REALLY on. We have two pretty good corners, too, who may take the edge off your passing game.

MH: The two defensive ends, Kenny Iwebema and and Bryan Mattison. They weren't very good at the beginning of the season and, like I stated above, they still make plenty of mistakes, but they are a HUGE part of why the Hawks got their season turned around after that ridiculous start. By putting more pressure on offensive backfields, they've allowed Hodge and Greenway to drop and cover the middle of the field better . . . meaning you can't automatically convert 3rd and 4 against Iowa any more.

O: Is Ferentz a goner for the NFL now that his son's graduating?

MH: I don't think so; he still has kids in high school. I mean, I realize he's probably only staying a couple more years, but I really don't think he would just bolt for any random NFL job. I would have said it was 60-40 stay vs. go, but since Brian Billick just got a vote of confidence, now I'm leaning more towards 85-15.

I know he's gone if the Baltimore job opens up, in other words.

O: What's your completely biased take on the carnival that was Urban Meyer, year one?

MH: I am deeply, DEEPLY concerned over this year's Outback Bowl. I fear that a swirling, white-hot vortex of brilliance may open up in Raymond James Stadium, now that the two biggest coaching geniuses in college football finally get to meet head-to-head. I saw a movie on National Geographic once where something like this happened. First a giant meteor hit Frankfurt, then some scientist who looked as much like Bill Gates as possible without attracting a defamation suit announced plans to create anitmatter in a laboratory, then he did, and the universe collapsed on itself. I'm afraid we may be in for something similar. What may happen in Tampa on Monday. Note: NOT a Journey album cover.

Much thanks to Mark, who also deserves congratulations for the recent delivery of a new baby in the Hasty family. Check out the Bemusement Park for pictures of the new kid and for our own answers to Mark's questions about the Outback Bowl and our close encounters with cockroaches the size of people...better known as Florida realtors.