EDSBS title:: "LSU: Kicking Ass on the Gridiron and Training the IT Midgets of Tomorrow Off It."

Setup: No real set-up here: the commercial simply begins with a thunderous drum cadence holding together the disparate elements of montage. The theme of the montage: LSU is your gameplan for life, illustrated here by x's and o's superimposed in quick cuts on the screen that alternate with images of LSU sports, the requisite microscopes, and other slides that flash some gnarly looking equations and what appears to be an organic chemistry diagram. Plenty of shots of large pieces of technology, jumpy video effects, campus life, profs lecturing, Mike the Tiger, and football fans covered in purple body paint. Insert one curious shot of what appears to be a female midget working in an bank of servers. End drumbeat, end ad on last frame: "LSU: A GREAT GAME PLAN ON AND OFF THE FIELD."

Subtext: Football! Tigers! Science! Midgets! Football! No dodging the bullet here--LSU nuts up and just admits that everyone thinks of it as a football school with an academic sideshow. (This is quite the opposite of this ad for Duke, which goes out of its way to advertise that in addition to being a top ten uni, it's also got mascots, team sports with scholarships, and all that other plebe stuff Ivy League schools tweedily pooh-pooh. ) They make a nifty segue with the football diagrams, emphasizing the technical strengths of the campus, but the Requiem for a Dream jump-cutting leaves us less electrified and more motion-sick, emphasizing the overall metaphor of LSU education=football-orgy meth fit with lecture hall flashbacks.

Hits: A full head shot of Mike the Tiger. He's badass and knows it. Being Florida grads, we have a special affinity for mascots that not only cannot be led around on a leash, but are capable of eating their adoring fans in a matter of minutes and more than willing to do so if given the chance. The commercial also earns points for honesty by embracing the football factory image and admitting that people who work in the IT department often shrink to near-dwarflike size after a year or two of study.

Misses: Plenty. The commercial features only three clear-cut examples of the seven deadly sins of a university commercial, but fudges dangerously close to cliche territory in many other instances: look, someone graduating! Look, a black and a white professor lecturing! Look, lots of computer LEDs flickering away! (Remember that the flickering LED bank is to university commercials what shots of reel-to-reel data tape were to elementary science films: the very icon of technological advancement.) A midget girl standing next to a man in a bank of servers! ("At LSU, only the most astute midgets work in our server rooms. Their grubby little hands are what keep our IT department humming...") Our favorite part is the blink-and-you'll-miss-it shots of the campus at the end. It's as if they did the whole commercial, watched it, and then slapped their foreheads and said, "Shit, we forgot to show what the place looked like!" Tacked on to the end of the ad you'll find about 1.5 seconds of scene-setting featuring LSU's terra-cotta tile roofs, which fly by so quickly you could have inserted shots of USC, Stanford, Florida without raising a single eyebrow.

In fact, we bet you could slip nude photos of famous LSU alums into the last few frames without anyone noticing. James Carville is shown on a bearskin rug is in the final frame. Prove us wrong--we dare you! (In case you're screaming out loud right now from the mental picture we just impaled your sanity on...you're welcome. ) 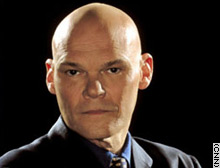 Well, Mary Matalin would has hit it.

Summary grade: D We have to be tough graders here, especially since this is a public university we're talking about here. (In the future we plan to review a Stanford ad, trash the hell out of it, and then give it an A anyway, since no one pays that kind of yen to be given Cs.) Earns points for embracing the football angle, but loses it in ADD execution, lack of branding, too many predictable shots of blinking lights and blooping machinery, and criminal underuse of badass mascot. Think about this---would thirty seconds of Mike the Tiger rolling on his back and playing with a ball have been a better ad than this one? Just Mike, lolling around aimlessly until the LSU logo popped up on the screen? Of course it would have, which is why it earns a D in our review.