Watching the Crimson Tide play with house money since Tyrone Prothro--the player we'd nominate for the Most Injurious Injury of the year--went out with a floppy ankle and crippled their offense has been one of the most nail-biting thrill rides of the year. In a sense it was like watching your most self-destructive and brilliant friend spiral their way into a miraculously successful adulthood. Thrill as they have unsafe sex with commercial sex workers in unsafe foreign countries! Gasp in awe as they drink their way into premature cirrhosis while holding down a six-figure job! Scream with delight as they treat mysteriously attractive partners like common whores and still get dates!

Alabama, for all intents and purposes, had been the football equivalent of that friend prior to their flaying by Auburn this Saturday--living on defense and the occasional special teams play alone while their receivers dropped passes like Brodie Croyle was tossing vials of anthrax at them. Just like the friend, it was only a matter of time before numbers ran against them and they tested positive for something nasty, ended up in rehab and discovered god and the need for a new dating pool. Auburn provided just that intervention by sacking the shit out of Croyle all day and embarrassing the offense into becoming a placeholder for the ball for three downs in between punts and defensive series.

(NOTE: Far from being a mere figure of speech, "sacking the shit" out of a qb is a very technical term denoting any game featuring double digit sacks of the qb. While Kyle Wright of Miami did enjoy a lovely seven sack evening against Georgia Tech Saturday night, we cannot refer to Wright as "having the shit sacked out of him." He was merely "turned into putty," or "had the pipes brought out on him" by the Yellow Jackets. There are rules to this stuff, you know. )

And it wasn't like these were eleven sacks of a mobile qb who was caught behind the line scrambling. Most of the sacks were of the awful, lions-bringing-down-wilderbeest variety, with the immobile Croyle getting dragged down from behind, horse-collared, ankle-gripped, smacked from behind, or in a few instances, huddling up in abject fright beneath our favorite type of sack, the Kodiak Attack sack, the head-on swallowing of a qb whole by a bull-rushing, sway-gutted defensive tackle. Alabama's line, playing without their brain, the starting center, looked like they were screen-blocking most of the game, giving bueno oles that would make a matador cringe with envy.

Somewhere around Stanley McClover's third sack of the day, we wondered how much physical punishment Brodie Croyle was actually enduring over the course of a game. Credit Brodie Croyle's tenacity--despite a Chris Chandleresque record of injury, he made it through a late season beatdown without puking on camera or holding his hand over his ass like a man with the runs. The shame's on the line, not Croyle. But we had to know: how much actual force and weight fell on Croyle over the course of the game?

Seven different scholarship athletes, fed thousands of quality calories and exercised into chunks of hypertrophied mass in their training, were credited with sacks on Saturday. Their names and weights follow, with multiple sacks indicated by number in parentheses following their weight.

The closest equivalent we could find--and the most appropriate one--for a one-ton animal of equivalent size and attitude to a football player was a black rhino, which averages around 2500 lbs. (A giraffe, while capable of kicking the head off an adult lion and around the same weight, doesn't seem as good a match as the rhino.) So on Saturday, Brodie Croyle could have taken the punishment by installment of 11 separate sacks, or simply gone out on the African serengeti with an air horn and taken one massive ass-kicking from a rhino. (By comparison, a Toyota Camry tops out at 3200 pounds empty, so should you ever be forced to choose between being run over by a Camry or a rhino, go light and take your chances with the animal, assuming they're moving at the same speed.) 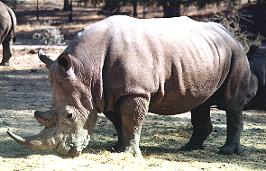 Next time Brodie should opt for the rhino.

For more detailed and mathematically adept musing on football and physics, check out Nebraska's fascinating series "Football Physics," which features plenty of cool examples of football science and one ungodly clip of Eric Crouch giving a nightmarish lesson on inertia to an Iowa defender.