GET YOUR HATE ON , DAY 2: DECONSTRUCTING ROCKY TOP

Share All sharing options for: GET YOUR HATE ON , DAY 2: DECONSTRUCTING ROCKY TOP

Break out the fuzzy Barbara Walters camera, it's time to get just a wee bit personal about exactly why we hate Tennessee and all the Orange Nation stands for. We promise not to cry, or reveal any ugly personal secrets save one: we're actually from the Volunteer State, and could have been sailing with the Vol Navy had it not been for a few key interventions by fate in our personal evolution. 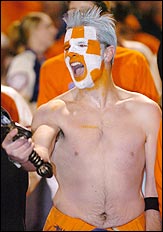 1. The first Vol fan we ever met was named Scott and smelled like pee.

We were six and didn't know shit, but we knew this: if you didn't want to be poor or seem like you were poor, you couldn't smell like pee. His family did have one of those kickass conversion vans with shag carpet and a tv/vcr, so he wasn't entirely without cool points, but the van was evidently the single focus of the family's capital investment plan, along with the above-ground pool and old-school NASA-sized satellite dish attached like huge parasites to their teeny shoebox of a house. But the pee smell trumped everything in our brains, so from a very young age, we carried the hard wired message "VOL FANS SMELL LIKE PEE AND ARE THEREFORE POOR AND ICKY" along with us wherever we went.

Fly, but not a great investment.

We know and are good friends with Vol fans who could afford to have us sold for parts in Port-Au-Prince overnight, and they certainly don't smell like pee. But first impressions are a bitch--ask any Gator fans about the jeans shorts thing. We don't even own a pair, we swear. Okay, just one, and we only wear them on formal occasions. With a tank top. And a mullet. We know they look bad, but your mother thinks they look sexy on us, and none of it stays on too long around her, heh heh, if you knowwhadImean, eh...

2. Spit. We've been spit on twice by Volunteer fans, once by a woman who--no lie--had all of twelve brown teeth in her head. Were we being smartasses at the time? Are we breathing, and do we not bleed Orange and Blue? Of course we were being smartasses. It was 1994, and we were beating the dog out of Tennessee at home, a game that eventually ended up at 31-0, Gators. Holding up a zero to a bunch of fans next to us got a Marlboro-scented loogee hocked back at us in return. You don't get much closer to sheer vile primate diplomacy than that. The second loogee, tossed in our direction on the way out of the stadium, wasn't nearly as impressive, but still hit our jean shorts--er, pants, just above the knee.

Maybe the woman was just recoiling in simian fear/anger at a symbol she didn't understand, much as a macaque who's never seen a phone before will start screaming and smashing it against the floor in frustration. But at least that was a face to face interaction, and there's a kind of honesty to that.

(Orson: Hey, you haven't scored, isn't that funny? Toothy: I hate you so much right now that I'm going to spit on you and see what happens. Orson: Officer! Tell her to enjoy the rest of the game from the parking lot, where she'll no doubt find love with a guy named Randy and consummate it on the hood of a conversion van in three minutes and six seconds. )

But the second spitter? Fuck him for that. Have the courage of a toothless woman and spit on someone to their face, at least.

3. Forced indoctrination. They teach kids "Rocky Top" in Tennessee public schools, a kind of forced indoctrination that a natural smartass such as ourselves rebelled at from the start. We were always really disturbed at the lyrics, too--a good breakdown of the disturbing bits can be found on this thread, but we couldn't resist a shot at it ourselves.

Wish that I was on ol' Rocky Top,
down in the Tennessee hills;
Ain't no smoggy smoke on Rocky Top;
Ain't no telephone bills;

Notice--no telephone bills. Which means that there are telephones, and the residents are working the system and tapping into them for free like a bunch of Mumbai grifters. No smoke, either, which means the residents have somehow escaped discovering the secret of fire. If we were playing a game of Civilization here, Rocky Top would be run over by the neighboring tribe of barbarians in 3...2...1...

The village of Rocky Top wouldn't last long in the harsh world of Civilization without fire.

Once I had a girl on Rocky Top;
Half bear, other half cat;
Wild as a mink, but sweet as soda pop,
I still dream about that;

The Gatorsports thread already covers how disturbing the bestiality thing is, but we think there's something simpler going on here. The only animal we know that is described in any language as a "bear/cat" is a Panda, known in Chinese as a "bearcat." Which means the dude in the song thinks he's slept with a panda, which aren't native to East Tennessee. Native to East Tennessee and sharing a vaguely similar color scheme with pandas are raccoons, though, which it's entirely plausible the sad hillbilly in the song got his hump on with one night.

Given the mutant size of some of the raccoons we've seen, one could easily confuse a panda and a raccoon after two or twelve shots of moonshine. Those fuckers can swell to near bearlike size on a steady diet of human refuse and baby starlings, and if the narrator had a ready supply of fried fruit pies or saltwater taffy on him, a raccoon would do anything for him, including letting him get a little lovin' on a cold, rainy night. And this being Tennessee, it's very likely he had some of both stuffed in the pocket of his overalls.

Okay, kickass singable chorus. Credit where credit is due.

Now we should like this verse, since one of the songs we've never managed to get out of our heads celebrates similar behavior in the face of encroaching law enforcement:


To the police I'm sayin fuck you punk
Readin my rights and shit, it's all junk
Pullin out a silly club, so you stand
With a fake assed badge and a gun in your hand

But take off the gun so you can see what's up
And we'll go at it punk, I'ma fuck you up

We always giggle when we hear Eazy-E say "Maybe it's because I kick so much butt." But we can't hang with Rocky Top's murderous antiauthoritarianism because they don't call them cops: they say strangers. Which means you, me, your Momma, Ned Beatty squealing in his tight-whiteys, and Tupac ain't welcome on pain of death, especially if you're after our booze. Yikes.

Corn won't grow at all on Rocky Top;
Dirt's too rocky by far;
That's why all the folks on Rocky Top
get their corn from a jar;

A push on this verse. They're bad farmers, but they like to drink, too. We can hang with that.

I've had years of cramped-up city life
Trapped like a duck in a pen;
All I know is it's a pity life
Can't be simple again.

No, you can't be simple again, but at least you get to have a kickass conversion van and date females who are identifiably human. If the narrator misses his life of drunken, murderous bestiality before the REA brought electricity to the area and the TVA gave 'em all the good bass fishing, he can have it. We'll take penicillin, cell phones, electricity, and our finest pair of jean shorts any day of the week over that simple crap.