Share All sharing options for: OREGON'S OPENER: A MIXED BAG

Prior to all the hype surrounding the return of the Evil Genius to college football, last year's Pac 10 also ran Oregon kicked off their season and debuted their new offense. Much like the architecture and decor of Venice, the new offense appears to be bits of pieces pilfered from other programs around the country... not that there is anything wrong with that. In fact, my hat is off to the Oregon staff for realizing that their mojo went the way of Andy Rodick's after Tedford left to build a legitimate program at Cal.

It was a decent showing for an opening game on the road but there are some definite kinks to be worked out. Oregon's new hybrid West Coast/Spread Option attack showed an ability to move the ball almost on command against an admittedly overmatched opponent, but early on stalled in the red zone. That is understandable, as the red zone is what exposes a team's execution the most and Oregon is still in the process of learning this system.

The biggest problem, however, was Oregon's secondary which got lit up in the first half with some major breakdowns on the deep ball. Matt Leinart must have been licking his chops while watching this game from a hot tub in Hollywood, while drinking his Cristal with a half a dozen Playboy Bunnies. On the positive side, they avoided these types of breakdowns in the second half. The verdict so far on Oregon's rebuilding effort... hung jury. The potential is there for a nice offensive squad, but if they must improve in the secondary if they hope to compete with cream of the Pac 10, USC and Cal. 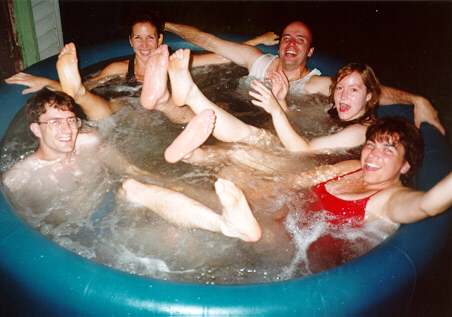 Come back in here Matt... the water's great. And Nick Lachey is on his way over.

Alright, perhaps Leinart's hot tub would look more like this.