The EDSBS.com Genius Watch? gives you a Double Stuf issue of the report today, with resident Geniuses Barnett and Neuheisel both showing up as blips on the radar today. First, despite a long silence and a wash of good press during spring practice, bad legal news concerning the Buffs pops up again. Even if the allegations come to naught, we ask: whatever happened to the proposed re-opening of the state's investigation of the football program? And what about the undeclared profits from Barnett's football camps? And who's paying all the lawyers here? And when will the Buffs bite the bullet and cash out Barnett's contract and just start over? When he goes 6-5 and loses to Nebraska, or when something even more noxious comes out about Colorado's program? 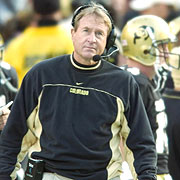 Barnett: the headset is a direct line to his lawyer.
And in part two of the genius watch, current Baltimore Ravens qb coach Rick Neuheisel says he's learned his lesson when it comes to office pool gambling. From now on he'll stick strictly to the online shit, since that's out of Barbados, and besides, they can't bust you for betting "V-chips" on your own team, can they? Because they're not dollars-they're "V-chips..."
At any rate, Neuheisel is clearly beginning to petition for a way back into the world of coaching, though whether it's at the pro or collegiate level remains to be seen. He's hanging around with humble, law-abiding folk as Brian Billick and Ray Lewis in Baltimore, so we're pretty sure he won't learn a thing about not acting like a total ass once he gets the reins to a program again.