If you're looking for an example of a program that didn't try to look the other way following the arrest of its football players, take a look at Murray State. Murray State's running back and former wide receiver were arrested for trafficing in a controlled substance and possessing drug paraphenalia. Both men were banned from the campus. Following the arrests, Murray State put football coach Joe Pannunzio on administrative leave. Allen Ward, the althetic director said ``Charges of this severity and magnitude demand stepped-up review of our football program.'' Now that is kicking things up a notch. 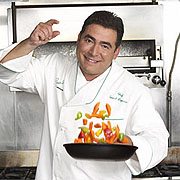 Two banned from campus and BAM! the coach is suspended.