In case you missed it, Heismanpundit wrote a nice response to our second Heisman post.

Well, first of all, you have to remember that writer's lists are not the same as those who vote for the actual Heisman. You will see from my site's history and research that the published writers are not nearly as conservative as the majority of the voters. In the end, it didn't matter that guys like Ivan Maisel and other noted pundits last year had Peterson at the top of their lists, because the rank and file voters--many of whom have dubious reasons for having a vote in the first place--always reward the older guy who has a body of work and who has the greater name recognition. Upperclassmen, by way of common sense, have greater media saturation than underclassmen, since they have had more years to become known to the broader public. So that is why Peterson--and every other sophomore--is a longshot.

As to your second point, I think it is neither here nor there. Even if the Big 12 WERE a pass happy conference--which it isn't--that would not necessarily preclude it from having good run defenses. For instance, the Pac-10 is known for being pass happy and it featured several outstanding run defenses, including the one that held Peterson to bumpkuss in the Orange Bowl.

The only team in the Big 12 that can be termed 'pass happy' is Texas Tech. All the other teams are primarily running teams that--in some cases--are also able to throw some basic passing schemes together with various degrees of success. One key to remember is that being able to throw good yardage does not make you a passing team, just like rushing for yards does not necessarily make you a good running team (for instance, Chuck Weatherspoon rushed for 1,000+ yards for Houston in 1989.....he was able to gain yards because every time the Cougars ran, it was a surprise).

As for the Peterson injury factor, I think his style lends himself more to that possibility. He even missed a game or two last year (when you total it up) and that could have cost him the 2,000 yard mark which, most assuredly, would have landed him the Trophy.

Thanks for the kudos...

We have to disagree on the Peterson age thing-if the voters really aren't as conservative as we said they were, then voting in a sophomore is a real possibility, especially with him garnering second last year. We will give HP-his new, tuff street name here at EDSBS.com- for harpooning our inane comment on a pass-happy conference yielding big yards. The reasoning is cracked. 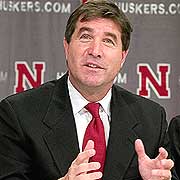 Bill Callahan: pass-happy.
But the Big-12 as a pass-happy conference? Perhaps we need to clarify here. Pass-happy, in the stodgy books of college football, to us indicates a team that will throw as much or more than fifty percent of the time, setting up the run with the pass. There are some teams-Texas-that won't do this. Not that we would with Vince Young at qb, either. Pass-wacky-a term coined by Gregg Easterbrook of Tuesday Morning Quarterback-means you'll pass to the point that balance is impossible. Hello, June Jones; hello, Mike Leach. Relatively, we still think it's true, especially when you look at the history of the teams in the conference, once the cradle of the wishbone.
Hell, maybe we will find enough material to make it to September. This offseason shit is a breeeeze...

Mike Leach: the epitome of pass-wacky