Real life has us slightly strapped for time today, but we had to drop our two cents-and we mean it, I think the most we could ever charge for any of our thoughts would be 0.02 dollars American-into the motherlode of draft nonsense going around in the leadup to Saturday and the rare direct interaction between the pro world and the collegiate: the NFL draft, a.k.a the bone thrown to desperate gridiron fans in April to sustain us through Arena season.
Notes:
1. Reggie Brown of Georgia is tough. We know very little about this draft, but we do know that David Greene, for all his composure, criminally underutilized the beefy Brown in the passing game, and it showed this past year. Brown earned his draft ticket the instant he got up off the turf following the second worst collegiate hit we've ever seen, his pasting by headhunter Junior Rosegreen in the 2004 UGA-Auburn game. Fred Gibson has the "flaky, but has potential" tag. Brown, meanwhile, is big, fast, and ready to clock in for work. He'd be a nice second or third rounder, especially for teams wary of drafting wideouts in the first round (meaning, everybody...) 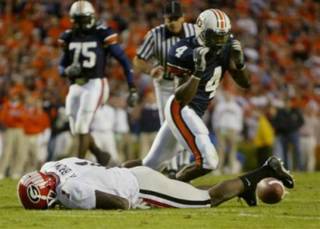 Reggie Brown got up from this. Now someone give him some money.
2. From one Brown to another. Ronnie Brown is beastly and fast and has hands that could catch a mayfly in a blowing gale. Carnell Williams, for all the pub, never did it for me, which is a shame given his first-rate nickname. He seemed leggy, a little slow for his rep as a burner, and didn't break tackles. Brown, on the other hand, ran beautiful routes out of the backfield, blocked like a konishiki, and took two or three guys to bring him down on every other play. And he doesn't even have the mileage a four-year starter has, a bonus in a position where longevity is a rare commodity.
3. There's little surprise here, but we think anyone drafting Channing Crowder better put a criminal lawyer on retainer now. We lived in Gainesville. If he couldn't resist the temptations of Hogtown, there's no way a 21-year old will act right in a metropolis. Bank on it.
4. Derrick Johnson from Texas is large. He's the recipient of our annual "looks like Deebo in Friday" award, so give him your bike and your microwave and no one gets hurt.

Derrick Johnson does not like you, and wants your bike. Now.
5. Troy Williamson, wideout from South Carolina, also falls into the criminally underused category. He's a project, but shit is he fast. Further proof that Skip Holtz was yet another S.O.C. at O.C. who's S.O.L., much like Jeff Bowden.
6. Little Man Watch: Darren Sproles is too little. He'll never add up to much. He can't take the hits. He'll get killed. He'll break in two the first time someone hits him. Don't even think about taking him. By the way, we saw Warrick Dunn at Eats in Atlanta a few months back. Looked great. Came up to my chin. Plays in the NFL, right?
7. Odell Thurman from Georgia hits. And hits. And hits. Charlie Weis said the patriots were soooo good because they were soooo mean, right? Odell Thurman would fit right in there, because he'll literally knock the piss out of someone once a game.
8. Jason Campbell just isn't that smart. So why draft him for the brainiest job in the game, quarterback? Someone will try it anyway, and watch the picks fly then...
9. Braylon Edwards is a Michigan wide receiver about to be drafted in the first round. If I were a GM, something about typing that sentence would make me very, very nervous.
10. Bold predictions: someone, somewhere, will draft Matt Jones for some role on their team. And after that, Jones will be mercurial, make a few astonishing plays, and wonder why he can't sit all by himself on the bench like he did at Arkansas. Good luck to the team that tries to fit this perpetually square peg into any round hole.