Stocks...we remember an uncle buying us ten shares in a refrigerator coolant business in 1984 for our birthday, and thinking how much cooler the GI Joe hovercraft would have been. (Fortunately, we got the object of our obsession for our next birthday, a pinnacle of happiness we've never really managed to recover, frankly. If they make a biopic of our life, we'll die with the words "Hovercraft!" on our lips.) In short, stocks have never really been our bag. Unless you're talking about metaphorical stocks, such as which football programs came out of this spring looking better or worse off for their scrimmages, off-the-field fiascoes and successes, and coaching changes. (We're also excellent at predicting celebrities bound for rehab-attention Vegas.) We wouldn't put money on them, since we all know gambling on collegiate athletics is illegal, but here's a wager-free gander at the buys, holds, or sells of teams finished with spring practice thus far.

1.Miami. Miami has fallen off the national radar, relatively speaking, after two lackluster seasons with the erratic Brock Berlin at the helm.

While he did win big games-including a spectacular comeback against Florida in 2003-Berlin had a habit of going ADD in the middle of games, throwing mind-blowing picks and overthrowing wide open receivers. Combine Berlin's struggles with the plunder of UM's lineup via the NFL draft, and relatively mediocre times were in the making for the 'Canes.

Berlin is out, and freshman Kyle Wright has been getting rave reviews at a school unafraid of putting a first-year qb in charge of the Hurricanes' run-first, throw-long offense. Wright should benefit most from the talent surrounding him-we swear they give recruits naked escorts covered in hundred dollar bills down there, so nasty is their recruiting-but should also gain strength from an underappreciated factor Miami's got by the truckload: continuity.Like at Tennessee and Oklahoma, continuity rules at Miami: the same coaches coach the same system year in and year out with pipelined talent heavy on speed, strength, and attitude.

In the tight ACC they will lose a game-parity in the ACC is now the norm-but it won't be to FSU and their kneecapped offense. The rivalry, for the moment, is on hold, with Miami clearly outpacing the Seminoles in coaching talent and sheer productivity. They'll drop one they shouldn't out of arrogance (second week at Clemson? Any takers?) but should fight their way into an ACC championship barring a total disaster.(Willie Williams drunkenly crashing a helicopter into the UM sidelines during a game, for example.) We're not knighting Larry Coker as a genius; far from it. But his capabilities as a program administrator overseeing a college football machine like Miami makes us wary of picking against them. They rebound in 2005 with a young core and scads of potential going into 2006. Buy.

2. Nebraska. We're putting them there because Joe Dailey just announced he's seeking a transfer, which by default means the quarterback at Nebraska this season will throw fewer interceptions than last year. But we can't make a buy strictly based on the negative right? And how can we bet on Bill Callahan? Don't go overboard with the label, okay-we know it's Bill Callahan, and that Big Red is for the moment a thing of the past. We do think that Nebraska could honestly earn the moniker of "earnestly mid-sized Red" in 2005, with former Wisconsin DC Kevin Cosgrove fronting a pretty solid defense to go with the improved offense. Callahan will get pass wacky-just count on that-but they should at least show significant improvement from last year's losing season. And who doesn't want to see Super Genius Callahan face off with Super Genius Gary Barnett in the final game of both teams' regular seasons on November 25th? The arrogance in the air could be thick enough to interfere with ABC's satellite feed. Buy.

Nebraska vs. Colorado, 2005: Someone's finishing this one under a boulder.

3. Stanford. As much as it pains us to type this, we have to admit that a private school in the distant and ignored Pac-10 made a damn good choice in firing Buddy Teevens and hiring Walt Harris away from a perversely ungrateful Pitt. Teevens got jack shit done in his time at Stanford, no shock to Florida fans who didn't even know he was on the staff at UF when Teevens got the Cardinals job. Harris, on the other hand, took Pitt from the pits to consistent Bowl game appearances and a yearly three-quarter thriller with Miami. His resume is perfect-he restored a small private school's team to prominence-and who wouldn't call a move from Pittsburgh to Palo Alto an upgrade? He won't win championships, but no one at Stanford expects that; 8-3 would be a great, great season for Stanford. We're hoping he gets it, along with a glowing tan and cases of good California vino from grateful and obscenely wealth alumni. Buy 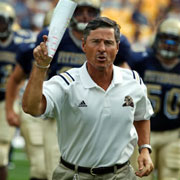 Walt Harris, high-tailing it out of Pennsylvania.

2.Notre Dame. If the chorus of boos will subside...thank you. We love the hire, Irish faithful. We really do. Weis is among the brightest minds to patrol an NFL sideline, and in crunch time Weis' calls always resulted in a dizzy, bloodied opponent wondering what the hell just hit him. We could rhapsodize about the way that man calls his screens all day-really, we could, which makes the fact that we've been married for seven years all the more astonishing. But we're putting ND at a "hold" status, and with very good reason: it's Notre Dame. High academic standards, an increasingly clueless recruiting staff, and the declining currency known as the Notre Dame mystique all add up to a whale of a job for Weis. And we haven't even mentioned the greatest obstacle a coach faces at Notre Dame: delusional alumni. Since 1980, the only coach who succeeded at Notre Dame cheated. Period. And Weis must do the same to satisfy the rabid alumni at the school. Urban Meyer, whose contract allowed for a penalty-free exit to Notre Dame, who coached with Bob Davie at ND, who's named after a freaking pope, turned the job down...and they still didn't get it. And the wake-up call still hasn't come for those who refuse to admit what Notre Dame is: Purdue with higher standards and a deeper stat book. Weis has figuratively and literally suffered to get this job-he was administered last rites after complications from gastric bypass surgery left him in a coma, a surgery he underwent after he lost jobs due to concerns over his weight. We hope he has the strength to tell the alumni to get real and kiss his fat ass when they go 7-4. Hold.

2. Washington One thing leads to another: the coach Weis replaces at ND pops up at Washington. Tyrone Willingham moves from one catastrophe to the next, doesn't he? Leaving the antediluvian expectations of Notre Dame to the very real monstrosity that is a post-Rick Neuheisel football program, Willingham has most people betting on his resurgence as a coach with a move back to the Pac-10 to a program desperately in need of discipline. Willingham's got scads of that, but Washington's program is practically shambolic, and having won in the past, the expectations won't be so low as to be completely avoidable (see Steve Spurrier at lowly SC.)
It's a tall order to fix what Neuheisel breaks. Hold.

Neuheisel screwed the pooch. Willingham will suffer for it.
Sell
1. LSU The reports out of LSU have been of players responding positively to Les Miles more "player-friendly" style. We've heard this before, and it means that teams raised under a merciless disciplinarian of a coach will, when the regular season rolls around, take a game or two to stare at the flowers, lay in the grass, and appreciate how beautiful life can be. They will also lose games they shouldn't in the process and play sloppy, undisciplined football. The tradeoff with Miles is that his offense will score more points than Saban's ever dreamed of-no offense to the magnificently monikered OC Jimbo Fisher-but will also give up big plays when players gamble and lose. Hardass DC Bo Pelini will have to play the bad cop in Baton Rouge, something he seems more than capable of, but the adjustment will take a month or two of the season to make. In the meantime, cue grumbling. Sell.
2. Missouri. Man, Brad Smith on NCAA 2005 is a force of nature. He rips off the corner of an option. He completes long bombs. He scrambles out of trouble and sprints across open grass for improbable touchdowns. Anyone who played the game should have known that, by rule, that meant Smith was going to disappoint in the season, which he did. The coaches at Missouri can't seem to figure out what to do with the fantastically talented Mr. Smith, while defenses seem to think he's all the Tigers have on offense. Thus far the defenses of the Big 12 haven't been wrong, and Gary Pinkel, who two years ago was a hot coach on the national scene, must figure out how to win a big game over an opponent besides the fully-declined Nebraska Cornhuskers and re-up his stock for 2006. Defensively, there's hope: 14th in the nation, and second in the Big 12, they can stop people. But the woes on the other side of the ball-and the coaching staff's inability to do much about it-are geniunely troubling. Don't catch this falling knife of a team. Sell.

The Virtual Missouri Tiger, wondering what's up with the Missouri offense.